I want to be honest with, this is how not to make a stir plate. As in, it didn’t work. We didn’t succeed. But there will be a follow-up 2.0 post about how to actually do this. I hope…. 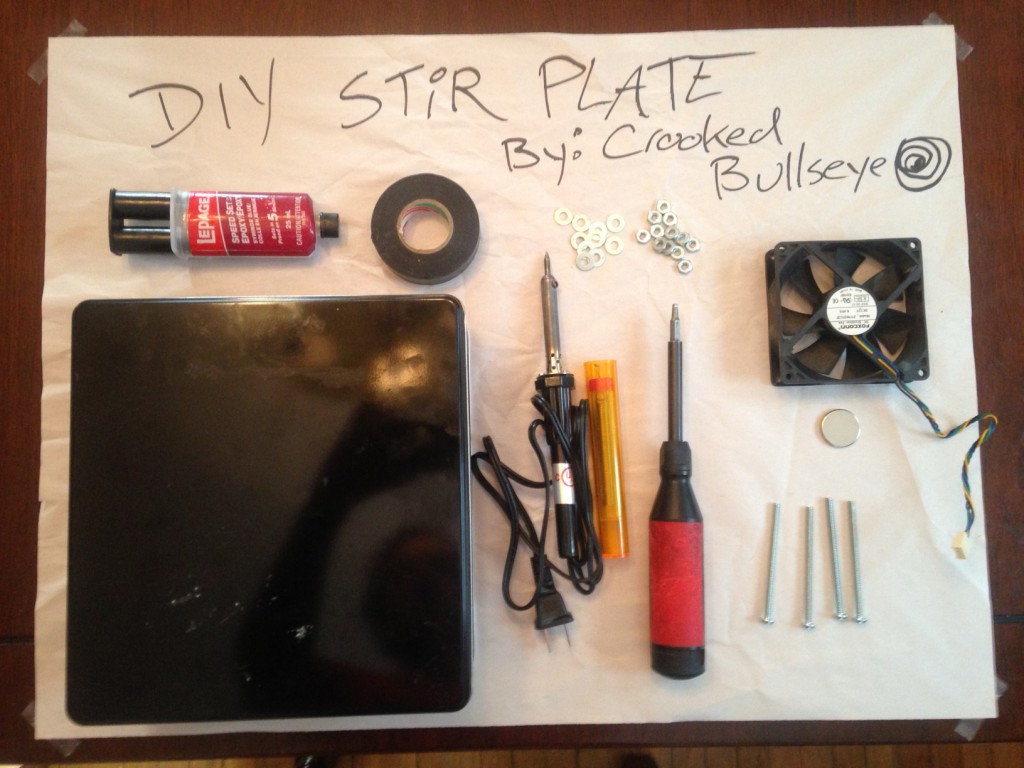 Okay, stir plate, right? If you don’t know, this is a handy device that you can use to make a yeast starter. This is helpful for us over at Crooked Bulleye, as we usually make 40l batches, and we like to do things as cheaply as possible. Most vials/packages of yeast are recomended for 20l batches, and buying two when, with a little time and planning, you can just buy one and let the yeast reproduce is right up our alley. Also, there are heaps of DIY projects for how to make one of these for cheap or free. So we decided to give it a go. 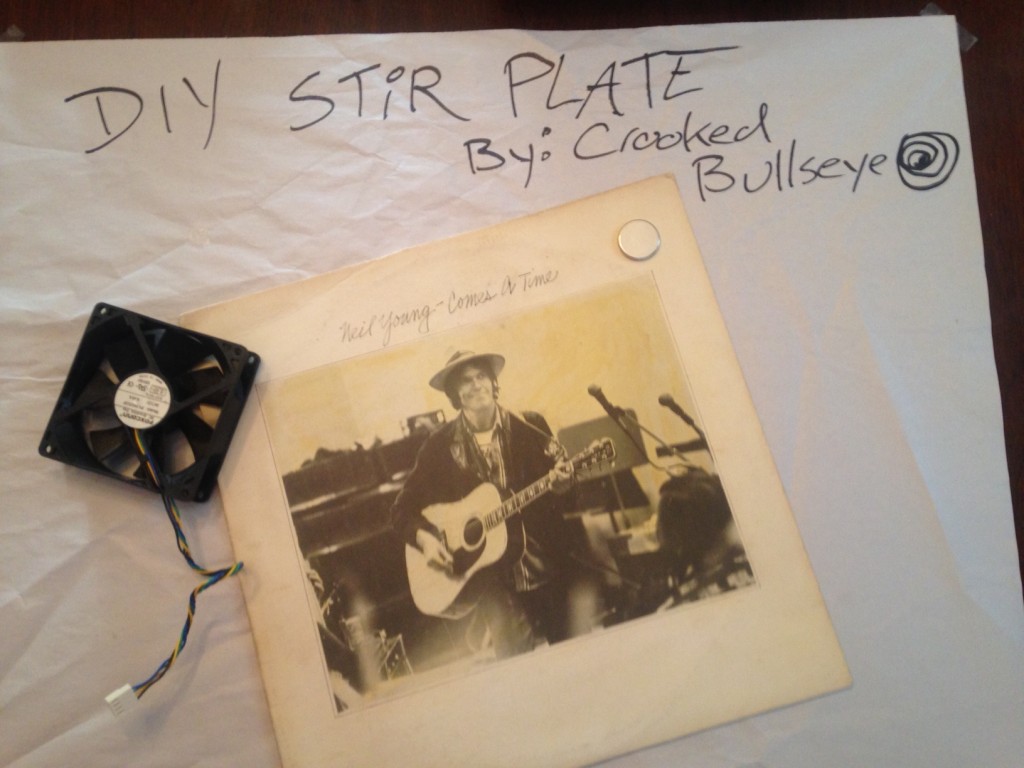 This project needed some tunes

The basic idea is: wire a salvaged 12v computer cooling fan with neodium magnets stuck to it, to a reclaimed DC power converter (think: phone charger), stick it all in a case, and hey presto: a bespoke stir plate. Using things that are salvaged and reclaimed, and words like bespoke, gives this project serious hipster cred. 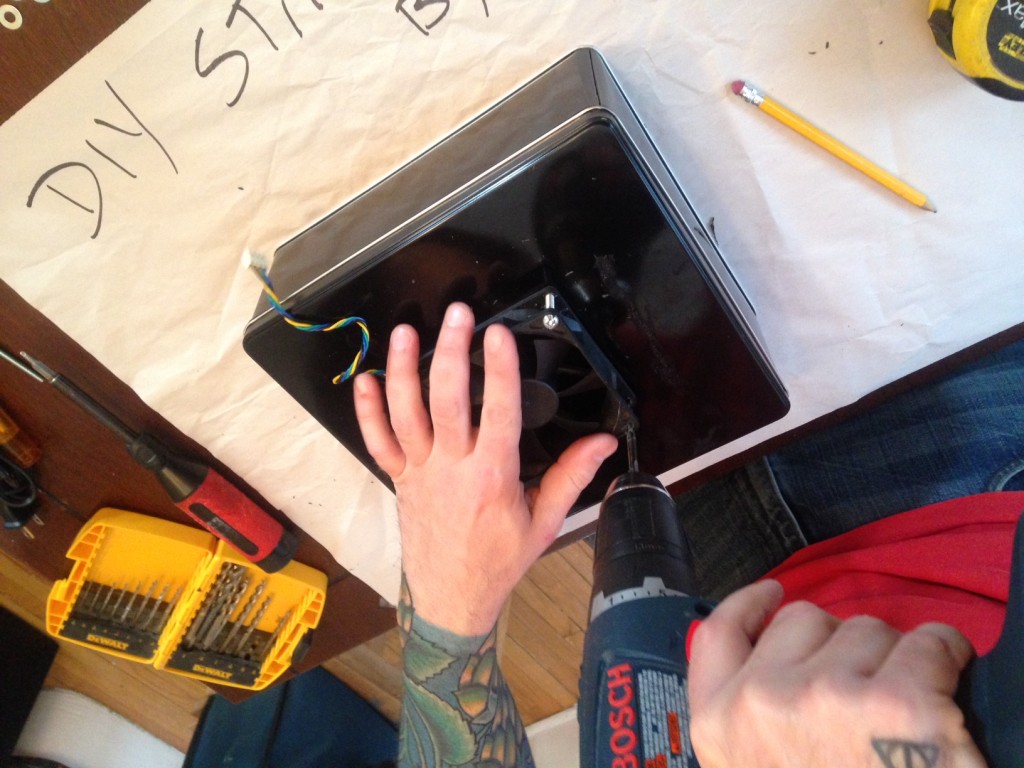 Using the fan as a drilling template

So Josh donated a pair of fans, and a power converter, as well as some tools, and Chris brought the soldering ability (sort of) and an empty Danish biscuit tin from a Christmas present to hold it all.

Most basic plan: chop the ends of the fan wires and power converter, solder them together, mount them all in the case, and you’re done. 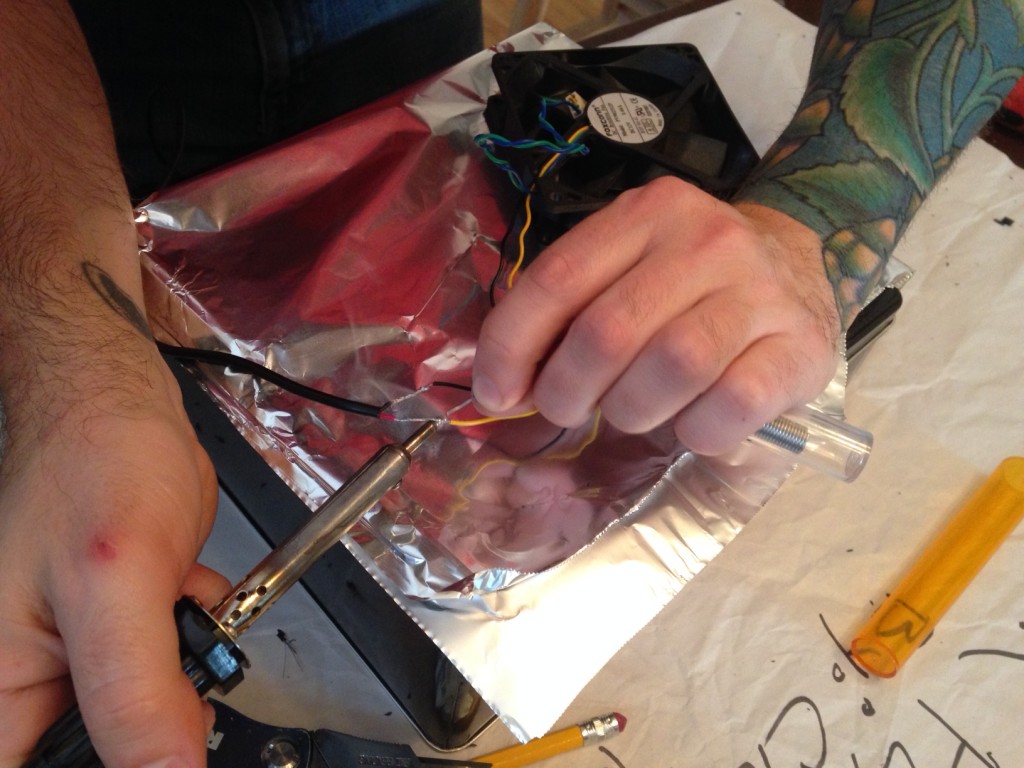 I love the smell of solder in the morning

First problem, we had been thinking we would use a single large button neodium magnet from Lee Valley Chris had lying around. Wrong, what you either need is a bar magnet (different polarities on either end), or else two small button magnets, with opposing polarities pointing up. So swap that big one out for two small, and epoxy them in place. 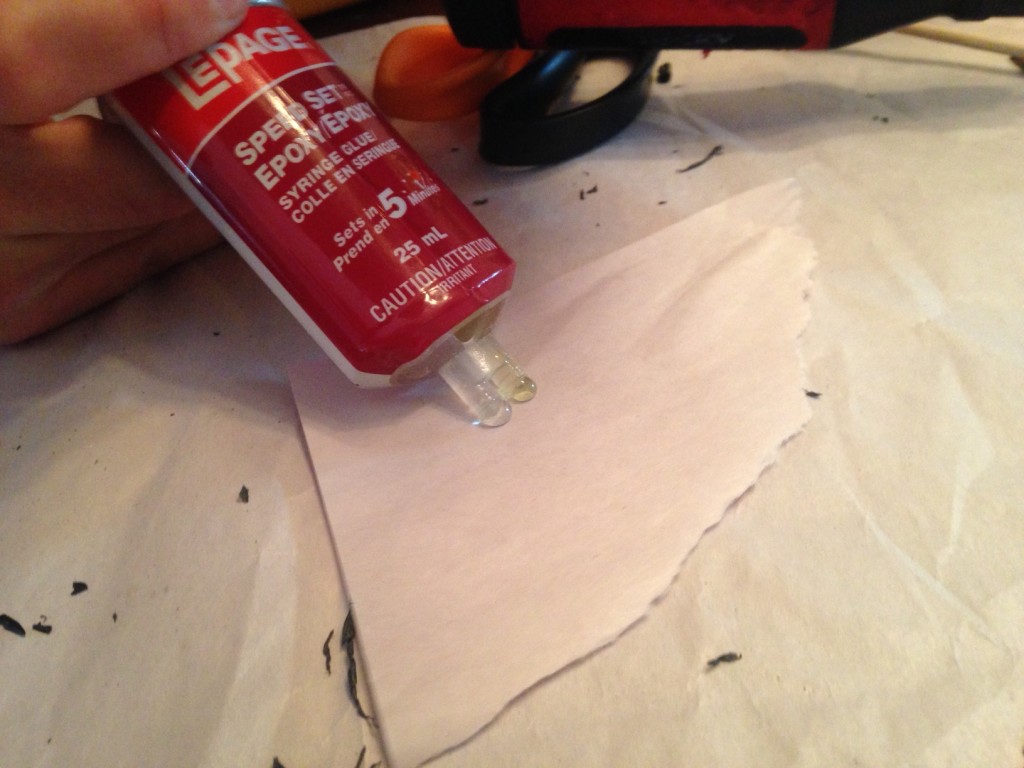 Nope, even using a 5v DC power supply, the fan still spins way too fast, causing the stir bar (so far the only thing we had to buy) to barrel-roll, not spin. Okay, so we need to introduce something to control the speed. So Chris pulled a volume potentiometer (think: volume dial) from an old electric guitar, to try that. No go. It was 500k resistance, and was also a logarithmic sweep, not linear. So it was basically an on/off switch, with no variable speed control. 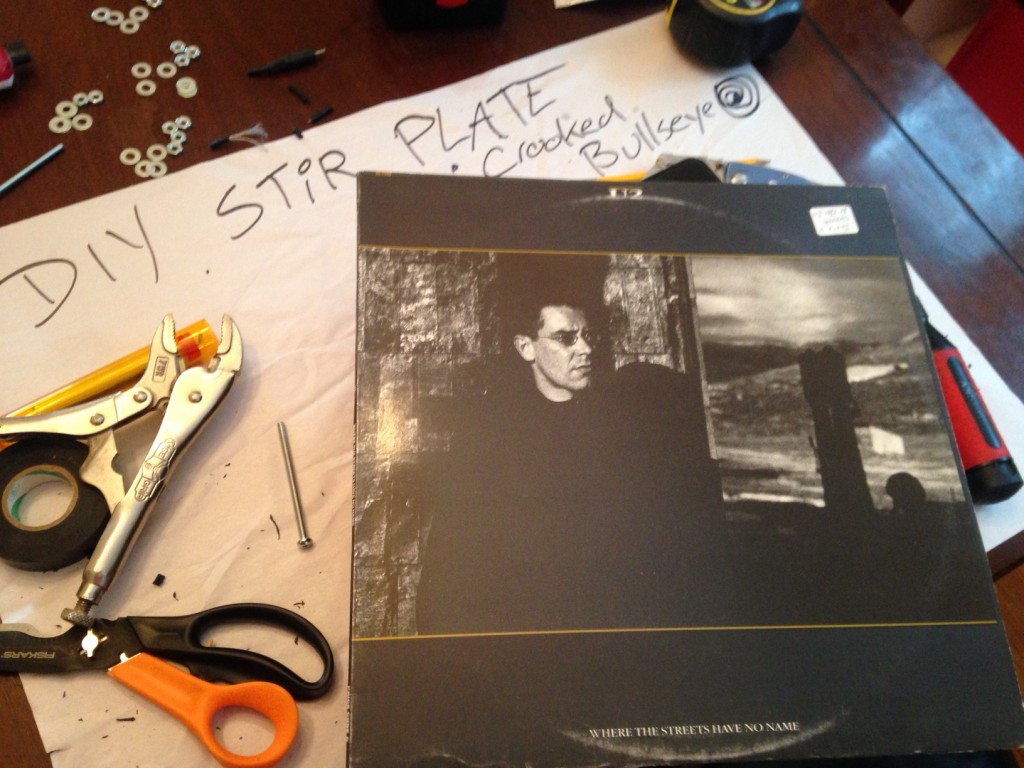 So Chris hit up a geeky robotics shop, and bought a 10k linear pot, as per a great many of the DIY projects online. Still no go. Now we’ve got a bit of speed control, but only in the last 10% of the sweep of the dial. The fan would slow down, but not enough to get the stir bar spinning. Still the wrong resistance. At this point it should be apparent that we are not electrical engineers….

So what do you do? Turn to your local home brew community, of course. (Seriously, if you’re even a little interested in home brewing, find you local club on Facebook, etc, and join up; we’re members of GTA Brews, a club that is over 1000 members strong). 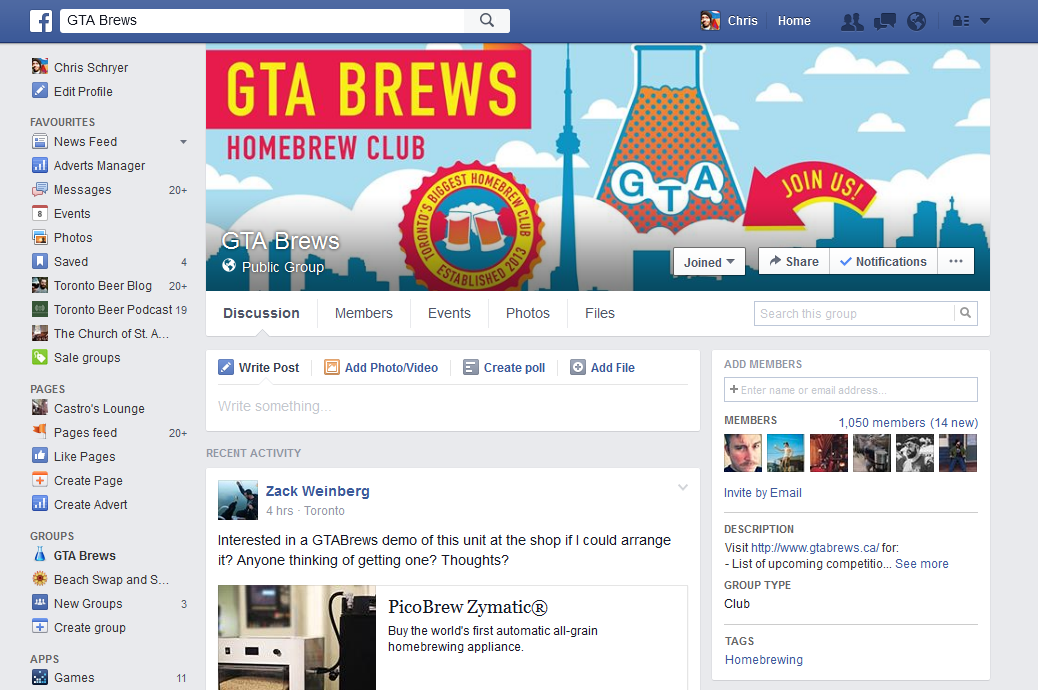 One of the biggest homebrew clubs in Canada!

I posted my situation, and solicited responses. I probably should have asked there in the first place, but I assumed so many DIY projects on the internet couldn’t be wrong. They were. I’ve been made aware what we actually need for speed control is a PWM (Pulse Width Modulation) control. The good news: You can buy them on ebay from China for <$2cdn. The bad news: shipping is 20-40 business days :\

So for now, we’re propagating starters in growlers and just shaking them periodically. This will work, but not as well as on a stir plate. So stay tuned for Stir Plate 2.0, hopefully our working model!